Once upon a time, there were two very special dogs, that had an incredible power. Ron and Harry, (that was their names) could talk to people.

They were still very young, only four months old. Ron was a boxer and Harry was a labrador. They were both very good and smart puppies. 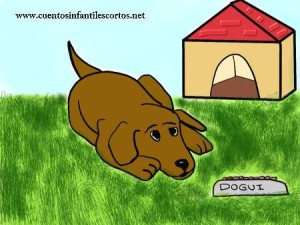 Nevertheless, the family who they were living with, abandoned them, leaving them alone on the street. The following day, a young couple, George and Lorrain passed by that same street and saw them.

After caressing the puppies, the couple decided to adopt them. Ron and Harry were really happy and they were also very hungry. Animals need love and care.

When they arrived at their new home they decided not to use their powers for the moment, but what they did do, from the beginning, was to take care of their owners and friends Lorrain and George.

It is important to know that having an animal companion is a big responsibility, and we have to take care of them as they need our love to be faithful and to love us. So if you can´t take care of an animal don´t adopt one, and if you do, never abandon them. They would never do that to you.