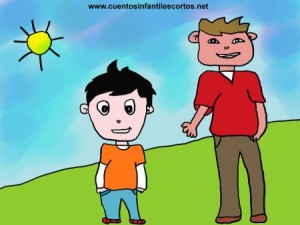 But one day he realised that he wasn´t alone. There was a young boy staring at him. The boy was very handsome. Aquiles asked him what he was doing, and the boy said that he was waiting for him. Aquiles, shocked, asked him “But, who are you?”- and the young boy smiled and said:

“Don´t you know who I am? We have been together for years, I am your guardian angel”.

This made Aquiles very happy. The guardian angel stayed with him for the rest of the day trying to make him see that he was not alone and that there were lots of people taking care of him. When the day was over and Aquiles felt better, the guardian angel disappeared.

Now Aquiles was very happy, not sad any more, for he had realised that lots of people around were taking care of him, and he also knew that his friend, the guardian angel would always be with him.

Aquiles finally found out what life meant to him: To make the others happy.