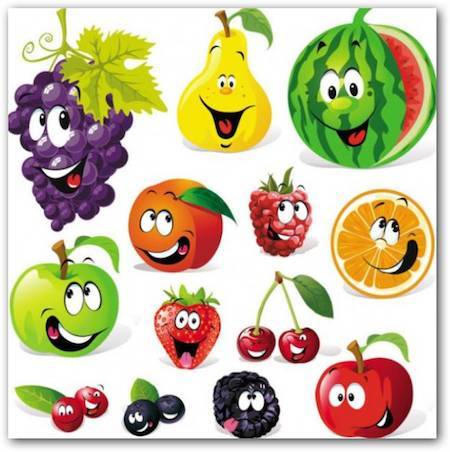 Then one day, a little man called Luram, became sick. He was really weak and lost a lot of weight. He became very skinny and could not grow any taller. He was really sick, had no energy, and only wanted to stay in bed. Had no strength to jump or run around.

One day, a fairy called Lily visited him, and invited him to drink a tonic, she was sure that it would be good for him. It was made from the vegetables, pomegranate, blueberries and elderberry.

When Luram drank the tonic that Lily the fairy had prepared for him, he started to feel better, he was full of energy, wanted to play, run around, and jump again. Fairy Lily visited him again, to check how he was feeling and gave him another tonic. He said it was great and so, Lily told Luram:

– “Now you are heathy and strong thanks to the vegetables that you used to reject, accompanied by a few dried berries and fruit. So, it´s time to be thankful to the kingdom of vegetables by giving back the good it has done for you.

Luram started thinking about what might be the best way to do something good for this kingdom.

He first visited all those who were sick, invited them to improve their eating habits; showed them the importance of eating vegetables and fruit every day. Luram invited them to drink a bit of the delicious tonic the fairy had given him. It was so delicious that, when they found out what it was made of, they realized that they could drink it every day, or simply just eat the vegetables and berries it was made from.

The inhabitants of the kingdom immediately realized that little Luram was doing good and that he could be their king. Little Luram answered humbly:

– “I´m not ready to reign yet because I haven´t improved my own eating habits completely, and there are still people here that are not eating like they should. I still have to make everybody understand that not eating vegetables or fruit or berries can make them fat, nevertheless, I will continue working and will only accept the title of: Prince Luram of The Vegetable kingdom.

Moral of the Short Story for Kids: Do not reject anything before getting to know it.

Values of the Short Story for Kids. To share, Humility, good habits, etcetera.