THE QUEEN AND THE JOKER

Once upon a time, there was a talent show in the castle, the queen loved it. Everything was classic, classic music, classic dances and more other things. But suddenly in the show, a joker appeared; he made everybody laugh except the queen.

She was very angry, because wanted every show to be classic, and the joker was telling jokes, making funny dances…Suddenly, he felt down the floor catching the curtains and breaking everything around the stage. 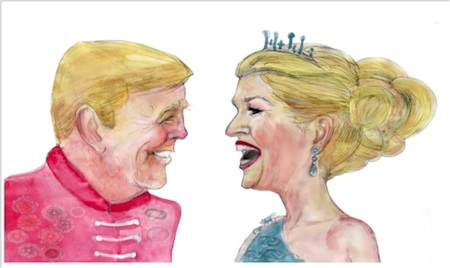 Everybody but the queen left running, she was so, so angry, that locked the joker up in a big cage. Suddenly, the princess, the queen´s daughter, appeared; she was really pretty, had long blond hair and went to visit the joker, when she saw him, said:

– “I really liked what you did on the stage, I had not laughed like that for many years”. – said the princess.

The joker smiled happy of knowing that someone had enjoyed his performance; then said.

– “Thank you, thank you, but that is the reason of why I got locked up inside this cage”.

– “Listen, I will free you from the cage, we will repair the stage and then, you will teach my mother that to laugh is sometimes needed; but do not fall down!!! otherwise everything will be ruined, do you understand?”.

So, they began to repair the stage, and when they finally finished, everybody in kingdom assisted to the new performance again. The queen yelled:

And the princess said:

The queen looked at the joker, he began telling jokes, and the queen laugh for the first time, and shouted very loud:

– “I love it !!!From now on, the theatre shows will be free theme. Not just Classic music, but everything you want!!

All kingdom was happy and lived happily ever after.

Next ArticleTHE PRINCESS AND THE MAGIC FEATHER