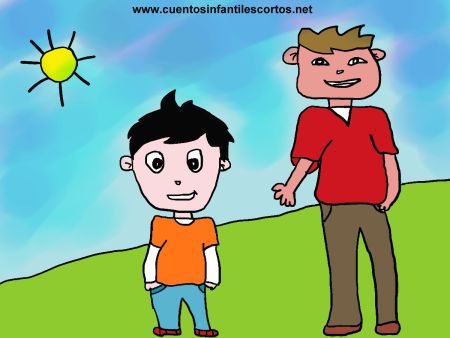 -“Lolo, we are so proud of you and of your good heart. Several mums have thanked me for the food you gave them yesterday. They said you are a very good kid, and Dad and I feel really proud of you. Besides this, you have lost some weight because your trousers and shirts are too big for you and so now you need smaller clothes”.

Over the following days, even though Lolo collected his vegetables every afternoon, the next morning the garden was full of vegetables, which Lolo happily distributed to his neighbors, helping many needy families, who were very thankful for Lolo´s generosity.

His parents were so surprised at these strange events, that they decided to go to the vegetable garden one night to discover what was going on while their son was sleeping.

They were astonished when saw many rabbits, mice, squirrels and birds working the land, directed by a very pretty blond fairy, that, who used her magic powders, to accelerate the budding process of the seeds that Lolo had been buying every afternoon using the money for the snacks and candies that he no longer ate.

One morning, when he woke up to go to school his mum almost fainted when she saw that Lolo was not a fat boy anymore. Thanks to the good fairy, he had turned into a handsome and slender student.

His mother hugged him and called his father. The three of them were really happy and later at school, the pupils and Mr.Adams, the teacher, congratulated Lolo who was not an alienated kid anymore but the most loved boy by his classmates.

Several years passed and Lolo grew to be a handsome and smart guy. His neighbors lent him land to sow all kind of vegetables and fruit trees. And the miracle of the food proliferation happened every day thanks to his work and goodness.

Those who know him will tell you that every afternoon, several trucks carrying food leave the small town were Angel lives with his parents, to bring happiness to hundreds of needy families from all the towns and cities around.

Next ArticlePAUL AND THE FROG