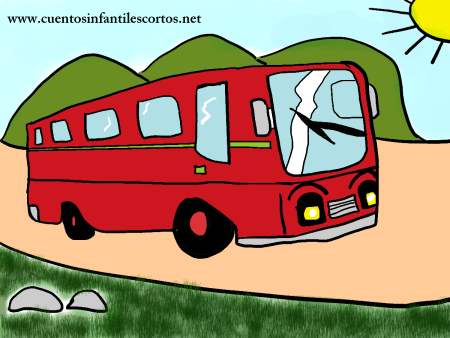 Seeing that all the red bus wanted to do was help them help their children get a good education, the villagers decided that each family would put forward some money according to how much they could afford. Then the helpful bus could go to a garage to be repaired and be as good as new.

And so it was that all the mums and dads in the village managed to put together enough money to fix up the red bus they loved so much.

The day after leaving the garage, the red bus arrived at the village square on time to pick the children up and take them to school. He looked like new, for he had been painted, and shone so brightly you could almost see your reflection. He also had new wheels so now he could continue his helpful work for a while.

The helpful red bus had learned something very important from this adventure, which is that if you are good and help people, someone else will be willing to help you the day you need it most. He also learned that working together makes you stronger: the inhabitants of Four Houses didn’t have much money, but by working together they managed to fix the helpful bus and get their children to school.

Next ArticleDELFI, THE LONELY DOLPHIN