There was once a very brave crocodile who had lived with Ahmed and Maya since he was very small. His name was Limpy, and we shall tell you why.

The story of our friend the crocodile begins at the river bank of the Nile, which was no ordinary river… It was a dangerous river, not just because of its wild waters, but also because there lived some fierce and very dangerous crocodiles.

For a very long time, no one had gone near the spot despite its great beauty, for the wicked crocodiles prowled its banks. That was why they put up warning signs telling people about the savage crocodiles.

One day, Ahmed and Maya were taking a walk along a path near the Nile. It was a very pleasant stroll, for the sun had come up and the birds were trilling merrily. 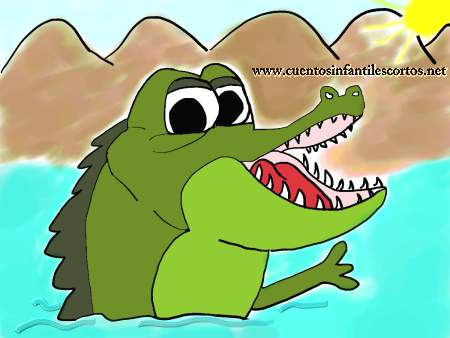 Ahmed didn’t hesitate for a second and ran to see what was happening, for he knew that crocodiles lay in wait at the banks of the river and it was a very perilous place.

When Ahmed reached the river bank, panting and out of breath from the speed at which he had run, he found himself face to face with two huge crocodiles trying to attack a little crocodile that had turned up at this part of the river and was completely confused at finding himself cornered by the wild beasts.

At last he managed to grab Ahmed’s hand, who pulled with all his might to heave the little crocodile out of the river where the two wild crocs were lurking. “Come on, my brave little croc, I’ve got you. Let’s get out of here,” said Ahmed with a wink.

The poor little crocodile was trembling in fear at what had happened, and said

to Ahmed: “Thank you so much for saving my life, but I don’t know what I’m going to do now – I can’t go back there…”

Ahmed and Maya exchanged a look and replied: “If you want, you can come and live with us. We have a little house near a lake where you could swim whenever you wanted… Would you like to come home with us?”

And that was how the little crocodile got his name, for although his leg recovered completely the name was a reminder that Ahmed and Maya had saved his life. And so it was that Limpy could paddle from one side of the lake to the other near the house where he now lived.

Next ArticleTHE PRINCESS AND HER SWIFT HORSE