THE PRINCESS AND HER SWIFT HORSE

In a far-off land there was once a sweet young princess called Sophie. The princess lived in the tower of a big castle with her father King Arturo and her mother Queen Victoria.

The young princess loved going riding with Flash, her horse. They usually went trotting in the forest, but what the princess liked best of all was to hurtle around the castle fields as fast as Flash could gallop.

King Arturo usually warned Princess Sophie to take care before she went riding and to avoid going into the forest, for there lived a winged monster that was very wicked. 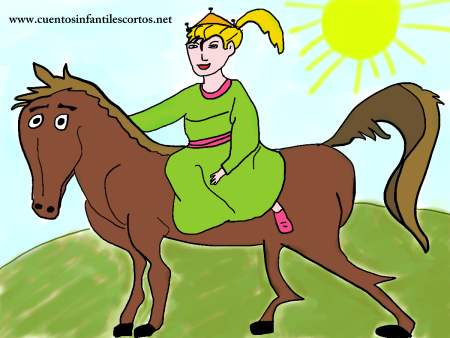 One day, Sophie got ready to go riding with Flash, for after several days of rain the weather had cleared and the sun was shining brightly. Flash and Princess Sophie had a great time, but because they were having such a great time they didn’t notice that they were going deeper and deeper into the forest…

Suddenly, Princess Sophie realised that it was getting dark. As she looked around, she noticed that they were deep in the dangerous forest her father King Arturo had warned her about.

“Flash, I think we’re in the middle of the forest,” said Sophie.

“We have to get out of here as quickly as possible, Flash. It isn’t safe,” said Sophie.

At that instant, a strange noise sounded from among the trees… Princess Sophie and Flash galloped away in fright, for the noise could be from the dangerous winged monster.

By the sounds of things, the monster was getting closer and closer but Princess Sophie didn’t lose hope. She carried on riding, trying to escape out of the forest and into safety. “Run Flash, don’t stop! Keep going and we’ll get out!” the princess encouraged Flash.

Now they could see a ray of light among the trees – it must be the way out, but the winged monster was gaining on them and looking back, Sophie saw that he was about to grab them with his claws.

“Go, Flash, go! You can do it!! We’re nearly there!” shouted the princess.

Then, just as it seemed that all was lost and the monster would catch them, Flash galloped more quickly than he had ever galloped in his life and they leapt out of the forest leaving the dangerous winged monster behind them.

Both the princess and Flash had learned how certain dangers can be avoided if we listen to the advice our parents give us. And Flash learned how important Princess Sophie’s encouragement was, for her confidence in him had helped spur him on.

Next ArticleCLEMENTINY AND THE VALENCIAN ORANGE TREE