It was springtime and, as is usual for this time of year, the ants were coming out of their anthills in search of food to store for the winter. Tip, who was only a few days old, wondered: “Why do we have to collect food in spring and summer to eat it in winter?” However much Tip tried, he couldn’t find an answer, for he had not yet left the anthill and had no other ant to talk to that could shed light on his question.

After a day of hard work, Tip’s mother returned to the anthill. She had barely got through the door when Tip came running out asking: “Mum, why do you have to collect food for winter now?” So Tip’s mother calmly came in, sat on the sofa and said: “Son, we collect food at this time of year because we ants can’t go outside in winter. It becomes very cold then, and sometimes it rains or even snows. If any of us go out in winter, we are in serious danger.” To which Tip answered: “So … the cold, rain and snow are bad?”

“Well, no, Tip. Actually, we need them to live, but just imagine a heavy downpour of rain: we’re so small that if we go outside we could drown because just one drop could kill us,” replied his mother. 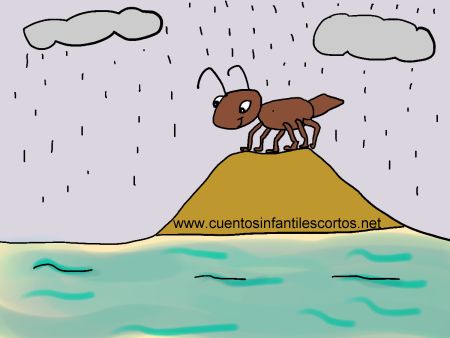 But Tip was a very curious ant, and he began to wonder what rain or snow was really like. So he decided to wait for the first rainfall in autumn to see for himself.

Eventually, there came a cold rainy day in autumn. Tip decided it was the perfect opportunity to go outside for the very first time. He waited until his mother had gone out for a cup of tea with her friends, then slipped out of the house towards the anthill exit.

Tip was still very small and didn’t know the dangers he could face. Although deep down, he knew that disobeying his mother was wrong, he still went ahead with his plan. As he approached the anthill exit, a strange thundering noise became louder and louder. “What on earth could that be?” he wondered and grew more and more curious to get outside and see the rain.

“It’s just that I don’t know what rain is, so I wanted to go outside and see…” Tip replied.

“But that’s crazy! Weren’t you warned about the dangers of going outside when it’s raining or very cold?” the guard scolded him.

“Yeeees… But I didn’t think it was that dangerous,” answered Tip.

The anthill guard, seeing that Tip really was just a very, very curious ant, decided to take him to a place in the anthill they called The Tower. From here, he could see the world outside but remain safe and sound.

Well, what a view greeted him at the top!  The rain was pounding down and the path outside looked like a wild water river. Tip finally understood why he should have listened to his mother, for it truly was crazy to leave the anthill in such weather. And so Tip the curious ant continued to be curious, but he had learned that we must listen to our mothers and be more careful, for it is all for our own good.

Next ArticleALBERT AND THE TIME MACHINE