THE LION AND THE WIND

There was once a very special lion called Simba who lived on the African savannah. Simba would play in the plains, running and jumping with his friends the leopards and other lions in the area. Simba had a very special gift, for every time he roared he created such a strong wing it seemed like a hurricane.

One day, as Simba was playing with his friends, they saw enormous machines destroying part of the plain by digging into the earth. “The humans are building oil wells…” said one of the wisest lions. 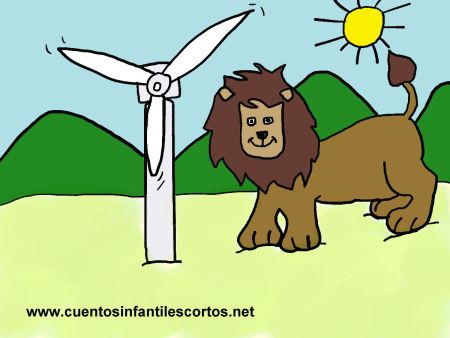 Day by day, the men built more and more oil wells, destroying the local nature in the process.

Simba had fewer and fewer friends with whom to play, and fewer plains in which to run about, and he knew that it was the men that were causing it all.

So he decided to ask the wisest lion in the area for a solution. The wise old lion said: “The only solution is for the men to stop using petrol, and use renewable energies such as wind instead…”

That gave Simba an idea, and he decided to help one of the most powerful renewable energies in the world: wind power. So he went round all the countries in the world roaring with all his might to create a great wind that would help men use more renewable energy. In the end, Simba succeeded in getting mankind to stop using petrol, and the African savannah recovered completely.

Next ArticleGLUG AND THE WATER CYCLE