Once upon a time, there were three little pigs that were going to build a house to be safe from a wolf, who was hanging around destroying houses and eating the pigs that were inside.
The three little pigs had different ideas and so each pig built a different house. Fatty was the youngest and most impatient. He wanted to finish his house soon and so he decided to build a house of straw and then he went to play with the other little pigs.

Hammy, the middle brother built a house of sticks as it wouldn’t take him much time either, and so when he had finished he could also go out to play. 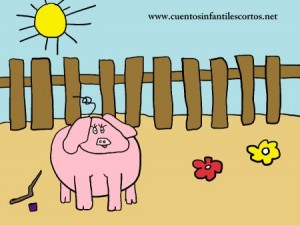 Porky, the oldest brother, decided to build his house of bricks. Even if it was going to take him longer, it was going to be a very strong house and a safe place from the wolf.

Once upon a time there were three little pigs and the time came for them to seek their fortunes and build their houses.

Just as the first little pig reached his door, out of the woods came the big, bad wolf. The little pig squealed with fright and slammed the door. – “Little pig, little pig, let me come in!” – cried the wolf – “Not by the hair on my chinny – chin- chin!” – said the little pig – “Then I’ll huff and I’ll puff and I’ll blow your house in!” – roared the wolf.

And he blew the little straw house down. Away raced the little pig to his brother´s house of sticks.

This made the big wolf totally furious – “Open the door little pigs!, Let me come in! ” – “No we won’t!” – ‘”Then I’ll huff and I’ll puff and I’ll blow your house down!” – But he couldn´t blow down that little house of bricks.

Share this short story for kids with your friends on Facebook, Google +, or Twitter with buttons you’ll find at the beginning or end of the story. Thank you! Stories for kids written by: www.shortstories.net (a pseudonym).’