ONCE UPON A TIME…

There was a kid goat called Mike who had a little train with three carriages, a red one, a yellow one and a blue one.

One day, he decided to travel to the clouds. All the animals wanted to go, but there was no space enough, so some of the animals went one day, and the others went another day. 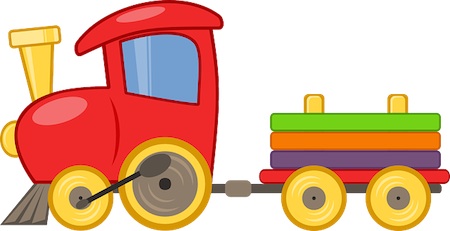 Claire sheep was always the first getting inside the red carriage, and John, the little bear was next. Pig Peter and dog Simon went always inside the yellow carriage, and Lucas the cat, and Lily, the rabbit were always in the blue carriage.

The little train advanced around the mountain with all the passengers inside, so high! closer to the clouds!.

They finally arrived at the highest hill and went out of the train, everything was covered with snow!.

They slid one after the other, rolling down the snow, so funny!

They had so much fun playing and slipping, but…Simon dog injured one of his paws.

The rabbit, Lily put him a gauze on, but it pained him and could not play. Lily stayed with Simon so he wasn´t sad.

It was time to go back and they went all inside the train and were so tired that…zzzzzzzzz…fell asleep.

Mike, the goat kid drove carefully, going slowly down the mountain. When they arrived, all he animals woke up and said:

Moral of the Story: Have fun and be supportive at the same time.

Value of the Story: Happiness.