Once upon a time, there was a little elephant that had the bad habit of scaring other animals with the noise coming from his little trunk. He laughed at the other animals and used to stand behind them and blow with all his might. The rest of the animals where annoyed with him because of his pranks. 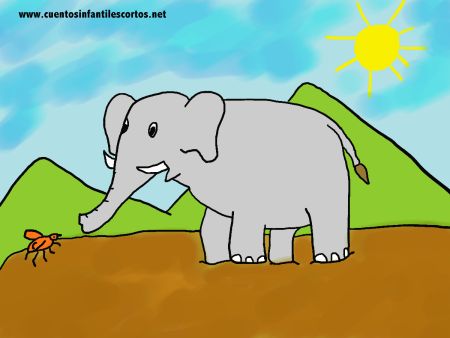 One day he scared a baby lion, who had hiccups. The lion’s parents went to talk to the elephant’s mother. The little elephant ran away afraid of being punished and eventually got lost. He cried inconsolably, thinking that, if his mother found him, he would stop being so naughty.

His mother realised that her little elephant had gone, but first thought that he was just hiding, but after a while, went to look for him.

The little elephant hopefully blew his little trunk again and again. Suddenly he saw his mother from afar and ran to her.

They were so happy that they touched trunks and the little elephant promised that he would not ran away again, and that he would stop being naughty, or at least he would try.