THE DONKEY NOT SO DONKEY

Once upon a time, there was a donkey living in Tukuman, who was a bit annoyed because “donkey” was the word used when somebody did not study or did not learn a lesson at school.

He was very fed up, always braying, because he did not understand why someone who did not know something was a “donkey”. “Why don´t they say rabbit? Their ears are bigger than mine!” – he used to say. 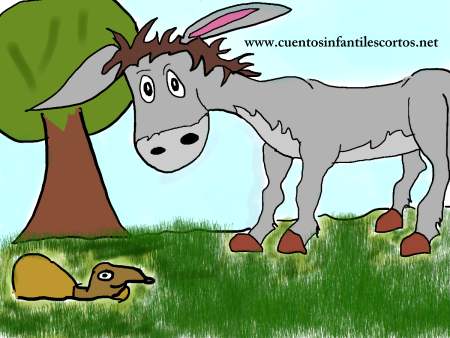 One day, the poor donkey found out that there was an old and wise cow admired by everybody, and he could not believe how a cow, whose only worries were to graze and to give milk , could be wise, and the donkey, who does lots of things, was known as a “donkey”.

“That’s not possible!” – said the donkey – I am going to school tomorrow early and I´m going to show them that to be a donkey doesn’t mean to be ignorant, hahahahah!” – and he went to bed braying.

The next morning, the donkey woke up, ate breakfast before the cock crowed and then prepared everything he needed for school. He went to school and was the first one to arrive. When the other children arrived, they were open mouthed to see the donkey was there first. But as they all knew him and he was very dear to them, they hugged him immediately and congratulated him for his decision to come to school.

Weeks passed, and the donkey became the best student in the area. The donkey motivated the turtle to go to class too, then the horse, and also the pig.

The town became the most studious town in the country. Everybody found out and began to visit the school, coming from abroad, from all the parts of the world, by plane, by motorbike, by bike, walking, etc. The impact was so strong that the town was baptized as “The capital of the world of animal wisdom“.