There was a beautiful tiger girl who liked to walk around the jungle.

One day, as she was playing with her friend the owl, she moved further away and between one game and the next lost the trail of her way back home. 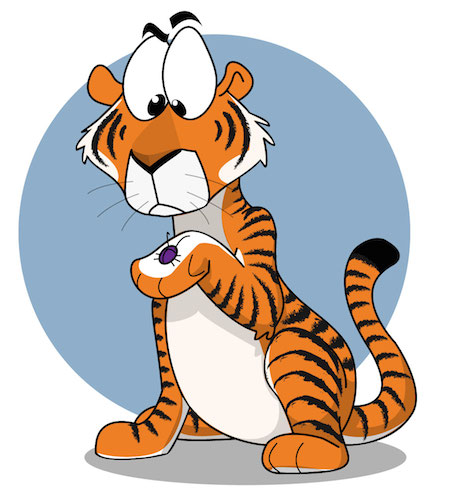 The frightened owl looked for her but could not find her. Meanwhile the little tiger girl ran and ran from one place to another trying to find her way back.

Her friend the owl was desperate and asked for help from other animals in the jungle. At nightfall, when danger was ever present they still hadn’t found her.

The defenseless and frightened little tiger girl searched for refuge inside a dark cave not suspecting that danger was waiting for her.

When she tried to lie down to rest after her sad day, she heard a ferocious roar behind her. She desperately ran away from the cave because a bear had noticed her presence and wanted to attack her.

She walked in the moon light until she found another place to rest. It was a tree trunk that a storm had probably destroyed. Here, she could lie down and think about what she was going to do the next day.

While she was trying to sleep, she heard a voice coming from the tree branches. It said:

– “Don´t be afraid, little tiger, tomorrow morning is near and you will be able to find your way home”.

The tiger said: “Thanks, but…who are you?”

– “I am an old and tired owl who knows every centimetre of this jungle”.

– “Really? You know the jungle? Will you help me find my mother and my friend?

– “Maybe, let´s wait until morning, rest a bit until it arrives, you need it”.

When morning arrived, the owl woke up the little tiger girl and said:

– “Your friend is looking for you with the other animals in the jungle. They are really worried about you, I will bring them here”.

Behind the tree branches where she had slept that night, her friend the owl and other animals suddenly appeared, happy at having found her. They were then guided by the old owl to the little tiger girl´s house.

From that moment, the old owl went every afternoon to visit her new friend. They played together and had so much fun.

Years passed and the little tiger girl became a gorgeous tiger, but never forgot the kind gesture that the old owl had made for her and that of her lovely friend the owl, who had searched for her unceasingly until he found her.