Once upon a time there was a little town in which lived two little bears that were in love. Their names were Peter and Anna. Anna was really happy as they just had one day left to celebrate their first anniversary. They had met each other on a campsite the year before. 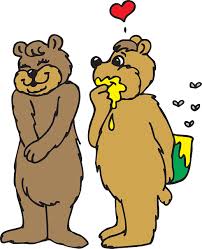 The next day Anna woke up very happy, and ran to congratulate Peter on their special day, but before doing this she thought that maybe it was better to wait until Peter did it first.

But Peter didn’t say anything about their anniversary. Hours passed by, and Anna was really upset and angry, so after a couple of hours she left the house.

She was crying on her way to the park and when she gfot there, it was full of bears in love all around, and that made her even sadder. Meanwhile, Peter realised that he had forgotten their anniversary.

So he went to buy Anna a big present and ran to look for her to apologise. But she was not at home, Peter couldn’t find her and then he thought: “She might be in the park!”

So Peter went to the park and found Anna crying on a bench. He apologised and promised that he would never ever forget their aniversary again, Anna forgave him and they lived happily ever after.

The moral of the story: Take care of your loved ones.

Next ArticleTHE GIRL IN LOVE