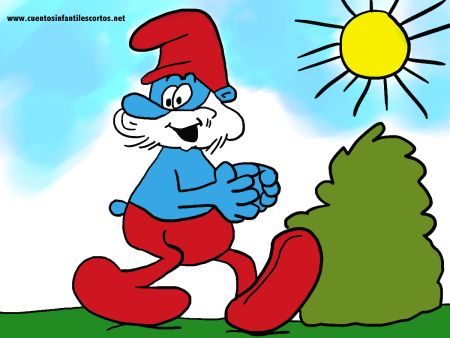 Mr. Snail told the gnome about a place in the field where there were many chestnuts.

– “I found lots of them yesterday, when I went for a walk” – said the snail to the happy gnome.

The snail and the gnome finished their delicious breakfast and went to collect more chestnuts to have dinner together.

When they arrived, there were no more chestnuts . Somebody had already collected them.

-“Don´t worry, I´m sure there are more somewhere near here, let´s have a look”.

They searched for chestnuts all over the forest until it started to rain. They looked for a place to shelter and saw a little wooden house. The door was open and they were wet, so the gnome said:

-“We can´t go in without being invited” – replied the snail.

But the happy gnome did not want to get any wetter, so he put the snail on his shoulders and went into the house.

– “Mr.Snail! look! Here is a sack of chestnuts from the forest!” – the happy gnome exclaimed.

– “But somebody took them before us. They aren´t ours.” said the snail

But the gnome wanted all the chestnuts for himself, so he took the sack and left to walk in the rain.

Suddenly, a fork of lightning broke the branch of a tree, and it fell on the happy gnome. Mr.Snail, who was following him, tried to help him out from under it, but the branch was too big.

Then, a wise little rabbit appeared. He had seen what had happened at the wooden house, and helped the snail to move the branch.

-“Maybe, none of this would have happened if you had not taken those chestnuts, that are not yours.”

– “These chestnuts are mine, I have collected them!” – the gnome insisted.

Seeing that the gnome was not telling the truth, the rabbit took him back to the little wooden house.

-“Look, happy gnome, look through the window” – said the rabbit to the gnome.

The gnome obeyed and looked through the window. He saw a little mummy rabbit, sitting at the table with her three kids. They were sad because there was barely anything on their plates.

-“The mother rabbit had collected all those chestnuts for dinner, and now they only have four pieces of bread. Meanwhile, you have there enough chestnuts for everyone” – said the wise rabbit.

-“Yes! happy gnome!” – exclaimed Mr.Snail -“You can cook chestnut soup for everyone!”

The happy gnome realized that he had been wrong and so he went inside the house and apologised to the mother rabbit. She could see that the gnome was repentant, forgave him and accepted Mr.Snail’s idea”.

So, they all had the happy gnome´s delicious soup for dinner. They ate, laughed, played…and that is how they all became friends.

Next ArticleTHE WITCH OF DARKNESS