THE BEE AND THE FORBIDDEN FLOWER

In a beautiful field of flowers there was a hive of one thousand bees. When Spring was almost over, the Queen bee realised that her descendent, the young Queen bee was ready to accept responsibility for the hive. So now was the moment to transfer the young bee her position. After she had taught the traditions and social behaviour of the group, the old Queen would leave the hive and the young Queen would create a new hive.

One day, the Queen told the other bees of her plan of to transfer her kingdom to the young Queen. The young Queen knew the plan and asked some of them to go with her to create the new hive. 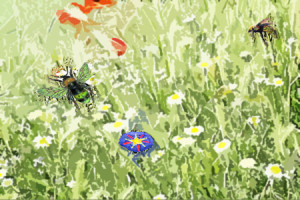 There was a little bee called Nala who saw the opportunity to leave and have new adventures. She had been told about the group of bees (swarm) that were to leave to build a new hive far from there.

Nala, like the others, had received the necesssary instructions on how to respect the queen at the new hive. One of the rules attracted her attention, it was about a big colourful flower with lots of pollen in which it was forbidden to land.

She asked the older bees why it was forbidden to touch that flower, and they all had different answers: That it was a tradition, or that once a bee had died when it touched the flower, etc. The important thing was that she was not allowed to be on that beautiful flower.

So, they left the old hive and after flying a long way  the swarm landed on a tree and saw a beautiful field of flowers. So they decided to explore the field to find a place to build a new hive. During the exploration one of the experienced bees showed Nala the forbidden flower. She was impressed by its beauty, but she still couldn’t understand why it was forbidden to touch it.

Once adapted to their new home they started work. They established turns to go to look for pollen. Nala really enjoyed her job. Sshe felt free to go to any flower and didn’t think too much about the forbidden flower.

One day Nala saw an insect that looked like a bee, but it was bigger, and it was resting on one of the forbidden flowers. So she went closer to see better. The big insect flew away carrying a large amount of pollen. Nala remembered the legend that her friends had told her, so she stayed there waiting to see if the big bee fell, but this didn´t happen. That day she stayed there staring at the beautiful flower, but still without touching it.

Another bee that was passing saw Nala standing there and asked her: “What are you doing? Why aren’t you working?” – “I have seen a big bee taking pollen from the forbidden flower, and nothing happened to her.”- Said Nala.

When the old bee left, Nala went back to fly over the flower. After a few minutes, another insect with black spots stopped on the flower and took some pollen without any problem.

Soon it was time to finish work and go back home, Nala was very nervous because she was going to tell the rest of the swarm what she had just seen. But when she arrived at the hive, a group of old bees were waiting for her.

“We want to talk to you, Nala” – said the bees – “Somebody told us that you have been flying over the forbidden flower.” – they said. Nala told them what she saw and the old bees went to tell the Queen bee of their decision: “We cannot permit anybody to doubt our traditions, it could be dangerous for the community. Nala has to leave“.

At the end of the day, the Queen bee told Nala that she had to leave the hive. Nala left the hive quite happliy because she was sure that she would find a new home with other bees that would understand her.

Next ArticleTHE BEGGAR AND THE DOG FROM OXFORD STREET