I had always asked why my neighbors never left their house. My parents used to say that they were a bit strange, and that it was better not to talk to them. But I could not control my curiosity. “How can anyone stay always at home without at least going out to to work?”.

I sometimes wondered if they were vampires, because their skin was white, kind of pallid, and I used to see them mostly during the night. I was scared, but not scared enough to not talk to them. 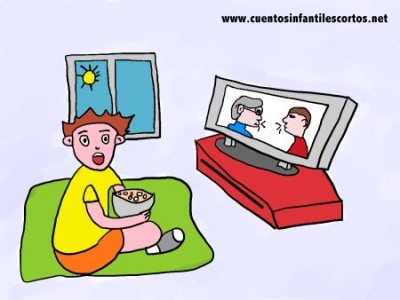 In the afternoon, I used to imagine how their house was, or why they never went out.

“Were they enchanted people or ghosts?”

I didn´t know, so, I gathered up my courage and went to their house with my friends because I never saw the door open. I had never been a boy that went out much and my friends weren´t either, so we never used to hang around the city centre.

The houses in my neighborhood are all very similar like dominos, all the pieces are the same except for the black dots, that would be each house´s windows and they all have a back garden and a front garden.

I had a tree house from where my friends and I used to spy on my strange neighbours. We had binoculars to see better and that is how we knew that they had two kids, a girl and a boy.

One of my friends said we should go and take a closer look because they never left the house. We all dressed up in black clothes, bit I suddenly got scared of my own shadow and screamed. I ran away and my friends followed me and so we didn’t see anything. It was a failed attempt.

The next day we got ready to go during the day. If they were vampires they would probably be sleeping. When we jumped over the fence, we realized that they had a little dog. It was not a big deal but, obviously, when we tried to open the door, the dog appeared in front of the house and looked directly into our eyes. When he showed us his teeth I was the only one left standing there and I ended up with my clothes ripped as if I had been attacked by a monster made of wires of spikes. Another failed attempt.

My dad always says, “third time lucky”, and I´m not sure what that means, but as dad always says that the third time is always the decisive attempt, we decided to distract the big dog with a piece of cold meat that one of my friends had brought.

We arrived at the house and called the dog. When I saw him running to us, I stood my ground and threw him the piece of cold meat. He ate half of the piece in just in one bite. We ran and got into the neighbours house while he was eating and finally could find out what was really going on.

Once inside we saw lots of weird things, like stuffed animals with terrifying faces. We figured that, if any of us was scared, we only had to close our eyes to feel better, and that´s what we did.

We saw that the house had many of doors and, what was even more mysterious, is that we suddenly heard someone coming down the stairs, so we hid behind a large sofa. What we didn´t notice was that the sofa was next to glass doors facing the back garden, and a man had been observing us from the beginning through the glass doors.

We looked at each other as if we were searching for a solution in the other´s face. The man called us over by waving his hand and inviting us to go outside to where he was sitting on a reclining seat. He looked into our faces and told us to sit on the chairs beside him. I was sweating. He opened his mouth and said one word, “Hello…” without any change of expression. The man was about 50 years old and had grey hair. He looked a bit mysterious and that is what scared us.

Our hearts were beating as if we were in a carnival. We greeted him back and then he asked us what were we doing in his house, why we went inside without asking and why had we fed his dog cold meat. We didn´t know what to say but just at that moment, his kids arrived back from school.

We told the man that we were there to visit them and that we were their friends. The man believed us and told us to go with them upstairs to a bedroom on the right-hand side that had a black door. When we got inside the lights were switched off and when we turned them on we I saw the canines his kids had, like vampires.

The door closed and we didn´t know what to do. The girl took my hand and guide me to a chair and asked me to sit down. Then she put her face to my neck and bit me. I screamed, it was like if my life was disappearing in a cloud of Christmas fireworks.

I felt blood spilling onto my chest. I looked at my friends, but they stayed quiet. I thought about everything I wanted to do all at once. I knew that I shouldn´t have gone into that house, and then I fell and hit my head and it really hurt. I got up and looked at my friends, now they were laughing at me. I couldn’t understand anything until I saw the man holding a hose that dripped a red liquid. Everything seemed like a joke, and that´s the last thing I felt before fainting.

When I woke up, I saw a Asian woman in front of me wetting my head with a cloth, and I asked her if we were in heaven. She smiled at told me that my friends had planned a joke on me with her kids because I had been very interested in the house and vampires, and that they were all acting.

On the one hand, I felt a bit silly for what had happened, but on the other hand I was relieved that my neighbours weren´t child eaters. Finally, I asked her why they never went out, and she told me that they did but through the back garden gate where their was another exit to the street. I wasn´t scared anymore.

Now I know that things are sometimes not what they appear to be. It is better to talk to people before trying to investigate them. My friends asked me to stop trying to be a detective.

Oops! I have just remembered that I have not fed my little mouse, well, friends, this is all for now.