Once upon a time there were three men crossing a field after escaping from prison, On their way across they met a guy with a guitar who joined them.

They had no money and were very hungry and wanted to earn some money. So, with the guitar, they went to a radio station. 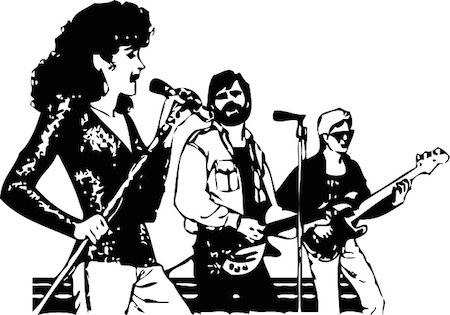 When they arrived they all started to sing together a very nice song and the radio paid them some money.

They then continued on their way without knowing that their song was becoming famous all over the world, and everybody loved it.

They didn´t know how famous they were and nobody knew their faces either.

One day they arrived in a town where there was a festival in the main square and in the middle of the square a big stage for a talent show.

The fugitives wanted to take advantage of this to earn some money and decided to sing their song.

When people heard it they realised that these were the famous authors of that song and started to dance and sing. The four men didn´t expect something like this and were very suprised.

But the town mayor saw them, and luckily as they were already very famous they could pay the fine for having escaped prison and the mayor pardoned them.

The ex-prisioners lived free and happily ever after.

Next ArticleTHE HORSE AND THE BIRD