Peter´s grandma was always telling fantasy and imaginary stories that she claimed were real.

One of Peter´s favorite stories was the one about the unicorn. His granny told him that she went once to the river for a walk and there was a beautiful unicorn drinking from the river. She described the unicorn as beautiful and magic, with two big wings and a colourful horn and that when she saw him, he was talking with a mermaid swimming in the river. 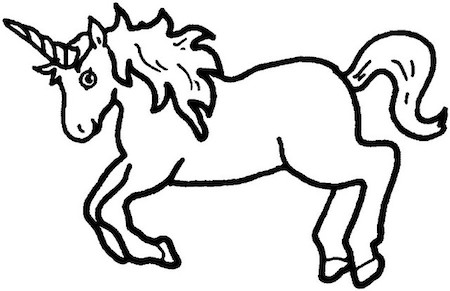 She had always said that only children that believe in fantasy and magic could see those magic things.

Goblins, birds laughing, magical creatures… “I trust you, you never lie, but unicorns and goblins are not real” – said Peter to his granny after she told him the story.

The next morning Peter went with his best friend Anna to the river. When they arrived they could not believe what they were seeing. A beautiful unicorn was there speaking with a mermaid and a green little goblin was speaking with a bird. “My granny never lies!” – screamed Peter.

“I´m here because of you. I heard your thoughts, so come with me and I will take you to a world of fantasy” – said the unicorn to Peter.

Meanwhile Anna was swimming with the mermaid. The unicorn asked Anna to go with them too and they all began their journey to the fantasy world.

Anna and Peter were sitting on the unicorn´s back flying near the river where the mermaid had swum. The bird took the little goblin and followed them.

“Over there is fantasy world! That island is our magic place. Only people who really trust in magic can see it.” – said the mermaid.

“It’s because you believe!” – said the unicorn

“You are actually part of this world!” – added the mermaid.

As they approached the island, the kids were open mouthed:  Unicorns, mermaids, goblins, gnomes, and in the middle of the island a big castle; “That´s the old queen´s palace.”

The unicorn landed in front of the castle and rang the door bell. Two lead soldiers opened the door and let the kids into the castle. Suddenly the old queen appeared, Peter looked at her and said: “Granny!!!!”