THE RETURN OF FERKUS, THE EVIL PRINCE

On a faraway planet, far from our galaxy, there was a civilisation called “Trock”. The Trock were stronger than humans and had different colour skin. They were, red, green and blue, and had special powers.

At the time of this story, the “Trock” were being attacked by invaders called “The Kalk” who were very bad and cruel. They had been thrown out of their planet because of their behaviour and so they wanted to control Trock planet and dethrone King Philip.

So King Philip and his soldiers made a plan that, if it worked, would lay a perfect trap to catch the “Kalk” 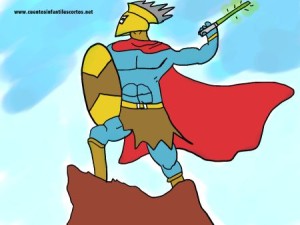 The plan consisted in making soldier figures wearing armour and putting them behind the door  so they looked as if they were going to attack the Kalk´s army, in which his brother, the evil Ferkus was the commanding officer. But Ferkus suspected that something strange was going on.

So the “Kalk” attacked at nightfall thinking that the “Trock” were unprepared, but that was not the case. King Philip knew the Kalk perfectly well, and above all he knew that Ferkus was attacking them only for revenge.

When the “Kalks” attacked the castle using their catapults, everything went quiet, no noise was heard and no movement seen. The Kalk thought that the “Trock” were dead.

So the “Kalk” army started to walk towards the castle and when the King Philip saw them come near he ordered his men to put the fake soldiers behind the door, and then he opened it. The Kalk army attacked the action figures until Ferkus said, “Stop!”.

They peered behind the door and realised that nobody was there, and so they started to shout: “We’ve won!” declaring victory, and marched into the castle.

When they were inside the courtyard, the “Trock” surprised them by aiming their weapons at them from above.

At that moment, the “Kalk” were unprotected. King Philip appeared in front of his brother Ferkus and said: “There is no way for you to escape. Give up and beg for forgiveness, otherwise you will be locked up for the rest of your lives!” – and Ferkus answered – “Never!”.

So they were all locked up in Oblivion Tower waiting for the prince Ferkus to come to his senses and realise that sometimes it is better to ask for forgiveness and to forget, rather than continue to be vengeful.

Next ArticleNATY AND HER DOLPHIN