THE LAMPPOST WITHOUT LIGHT

Every day, when the sun disappeared over the horizon things were hard to see, so Claudia would turn her great light bulb on, and shed light and happiness over the town. 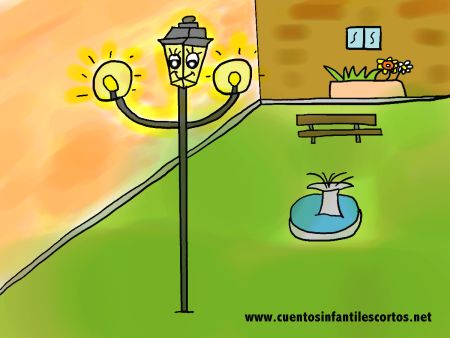 One day something horrible happened. As the sun was setting on the horizon, neither Claudia the lamppost nor any of her friends lit up. “Do you know what is happening?” Claudia asked her friend Izzy, “It’s the first time in 50 years that something like this has happened to me” – “I have no idea what is going on,” replied Izzy just as surprised as Claudia, “but look around you, the entire town is dark,” she said.

As Claudia and Izzy tried to figure out what was happening, they suddenly saw some lights that looked like flashlights, and heard voices approaching. Claudia immediately recognised one of the voices. It was the town mayor.

The mayor was discussing the blackout in town with two other people, “It’s not possible! How can there be no electricity?” he asked, and then sighed, “I really don’t understand what is going on”.

Claudia the lamppost, listened to everything the mayor said. She turned to her friend Izzy and said, “We knew that sooner or later the day would come when there would be no light,” and after a pause continued “Look at that town up on the hill, they still have light!” – “It is true,” said Izzy, “We knew it would happen and now we can’t do anything about it. The people in that town on the hill must have thought about it, and they still have electricity. Look at how many solar panels and windmills they have!”.

The mayor, saw how much smarter the neighboring town was and decided to follow in their steps and take the same measures the other town had taken a few years earlier. He was afraid that one day oil supplies would run out and so decided to invest in clean energy like sun or wind power that would deliverr the necessary energy to light up the town.

So a few months later, Claudia the lamppost was able to shine her light over the town again. It shone bright like the first time. The only difference was that instead of using oil as fuel, she was now using renewable resources that were less polluting, like the sun and the wind to power her light.

Next ArticleTHE CACTUS AND THE ANNOYING BIRD