In faraway mountains there was a magic river that turned everything near him into life.

The Stones rolling down from the road above were transformed into a huge trees next to the river.The broken branches that fell into the river turned into beautiful fish. 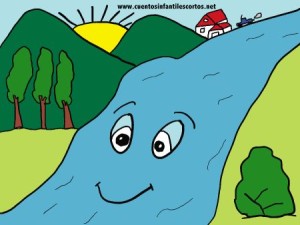 Nearby the mountains there was a village where the citizens used cars to move from one place to another instead of walking. They didn’t realise what would happen if they used the car all the time.

One day, an ugly cloud appeared and started to spit out acid rain that polluted the magic river, and, slowly, made everything around the valley die.

The river was scared and called all the animals around to tell them what to do. When they arrived, the magic river started to speak: “Animals from the valley, I need your help. A black cloud has invaded. You have to go to the village and tell the men and women that their cars are causing this disaster“.

The animals went to inform them, and so all the men and women had an assembly to discuss the situation. In the end, the Mayor told the citizens of his the new measures: “People from the town, from now on we will move on foot except to go to villages that are far away. If we let the valley die, we will die too”.

That is how, little by little, the black cloud disappeared and life came back to the valley, thanks to the village people who had understood that it was not right to use the car for short distances at the expense of taking care of the environment.

Next ArticleTHE SNAKE AND THE SWORD