FROGS ASK FOR A KING

There were a group of frogs relaxing in a pond where they used to spend every day splashing in the water. One day, one of the frogs said: 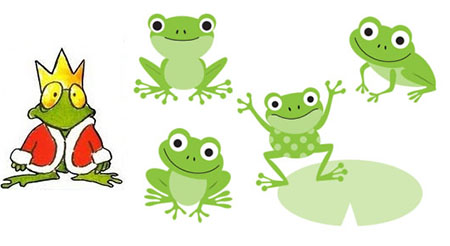 All the frogs went to ask Zeus, their God, to send them a king. When Zeus heard this, he struck a lightning bolt against a trunk near the pond. When the frogs heard such a tremendous noise, they lept frightened into the water. Only one of them approached the trunk to meet the King Zeus had given them.

But when the frog realised that it was just a trunk floating on the water, she called her mates and they jumped onto the trunk one by one to get it all muddy. The angry frogs reproached Zeus for not having sent them a real king.

When Zeus heard the daring frogs, he sent a stork to eat them one by one.

Then the frogs, angry again, begged Zeus to save them from the danger of the stork. But he said:

“These are the consequences of your acts. You already had peace and harmony, but wanted a king to rule you, now it is the stork who will govern you.

That is why frogs hide every time they see a stork, repenting of having asked for a king.

Moral of the story: If you already have peace and harmony you don´t need more.

Next ArticleA CARICATURE OF MY MUM