ADELE JUST WANTS TO BE HAPPY

Adele was a small and lonely cloud. She had no friends and was not able of taking up water for some time, and of giving water either.

The other clouds did not want her being near, because she could not help them anymore, every time Adele tried to reach them the rest became so angry causing a big storm. 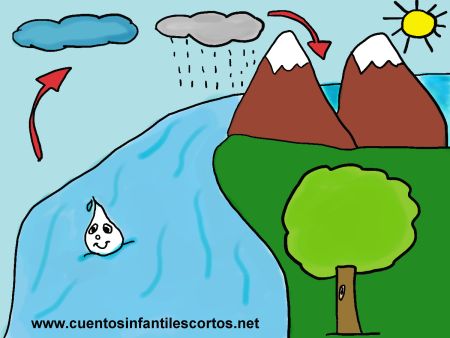 She was always at the same place without moving, what annoyed Julius the sun, besides that she was covering the bald mountains.

Adele did not know what happened to her, as everybody ignored her, she could not ask anyone. She had tried to talk to her mates, the other clouds; but every time she approached them, they pushed her away.

One night, Adele decided to talk to the moon, who was considered the most wise in the firmament. She told her everything, and the moon said:

– “You are sad and crestfallen because you are not able of doing your task as a cloud, as well as you have no friends, are alone and solitude is not good for anyone. I would also feel alone if the stars were not with me every night, and my light would not be so bright. I think you have to make a big effort helping your friends to demonstrate them that you are looking forward to work as they do, I am sure that if you really try it, will finally take lots of water and will be able of working with your friends who I am sure, will accept you”.

- “That is the only think I want, to be useful and have friends”.

– “think how important is the work of the clouds. You carry water to drink, for irrigatimg the fields, to fill wells and rivers, clean mountains…water is a lacking and essential resource, and human need it more than anything to live. Don´t worry about having friends, good friends come when you least expect it, and stay with you if you need them”.

– “Thanks for helping me, Moon, tomorrow, I will make a big effort to do my job, will try to give the water I have to a needed place and then will begin a new cycle of loading a unloading water. I won´t be discouraged again, I want to be a good cloud!”.

The next morning, Adele woke up very happy and optimistic.

-“I am going to unload the water I have, but I need Vince´s help”.

Called Vince to ask him for help to make her task.

Vince made fun of Adele at the beginning, but after seeing her so convinced looking forward to work, decided to help her.

Vince began blowing and Adele moved softly through the sky, searching for some place where the water was needed.

Passed over a dry river, full of stones and branches, wanted to send her water there, but Vince convinced her not to do it, because the water she was carrying was not enough and would not help at all.

Kept moving, passed over a small desert, but Vince explained her again that was not a good idea.

Suddenly, stopped over a farm, where a girl was whispering to a dry and skinny plant:

– “Little plant, I am really sorry, but I don´t have water for you, the wells around are dry for some time now, and there is no water for watering. We just have a small amount to drink”.

Adele heard the girl and did not hesitate to help her. Approached a well near the house and gave her all the water. The girl was very happy, took a bucket, filled it and gave water to her little plant.

Adela was weak and empty, but the girl´s happiness gave her strength to find a place to take more water and give it to the girl again.

Adele and the girl became very good friends since then.

Adela stayed around that place forever, sharing her water, never felt useless again, and had so many friends, kids and not so kids, who told her stories and invited her to their parties as she was one more in the family.

The clouds in trouble used to visit her for advice, and Adele was always there listening and helping.