JOSH AND THE AMAZING SHADOW

Josh was a lonely man who used to spend most part of the day sleeping. His shadow, used to make the most of it during the night, and when Josh was sleeping deeply, the shadow used to go out and have fun.

One night, he was not able to sleep and saw his shadow going out through the window. He waited angry for her, until she came back home. 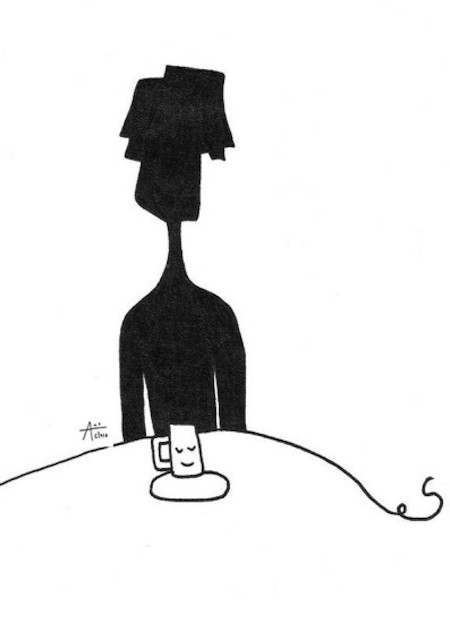 When the shadow saw Josh, tried to run to the door, but Josh shut her up inside a glass jar.

Josh was sleeping while his shadow was suffering inside the jar.

– “I like you being at my side, but I just can be happy if you are happy too. I prefer to let you go, if your happiness means being far from me. I know I will suffer at the beginning, but I guess i will feel better after some time”. – said while opened the jar.

When Josh saw his shadow again it was autumn, and the wind was playing with the dry leaves. His shadow was making the kids laugh on a brick wall, telling improvised stories. He was shocked, his shadow was amazing, and he missed her:

Looked around, every single person around had a shadow behind, he felt so lonely and sad, and some tears ran down his cheeks. Suddenly, somebody stopped behind him and gave him a handkerchief; it was the shadow. Josh was confused, he did not understand why the shadow had gone, and now was back. The shadow told him a story making him cry with joy.

Josh realized that the shadow did not want to be behind him, because he was already behind, that is to say that he had turn the shadow of a man he had been once, but was not any more. From that day on, the shadow and Josh walked together, side by side, and they were together because they wanted to be.

And that id the end of the story…

Moral of the story: Pure love is free, we can not force the love to be by our side. Love begins loving ourselves.

Next ArticleTHE BAD WITCH AND THE HAPPY COCKATOO