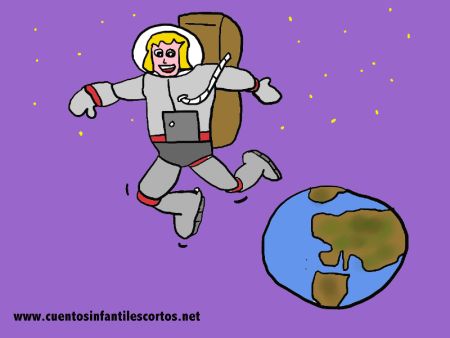 – “What does this ugly, giant toad want?, Maybe he wants me to kiss him…that would be disgusting!”.

She continued walking and the toad kept jumping around beside her. After considering the toad´s insitence, the princess wondered:

“What if he was a prince? I will have to kiss him but then that would be really disgusting, I cannot do it!”.

The toad continued to stay by her side…

After a few more hours she finally decided what to do.

– “Well ok, you have been with me the whole time here in the jungle. I guess you are asking me something and so I will kiss you, but just once because you are actually a really ugly toad.”.

The princess knelt before the toad, closed her eyes and kissed him. When she opened her eyes she saw the handsome space cowboy. She asked him:

– “I am not a prince, I am a Space Cowboy! I crashed in the jungle just before you came by. Thank you so much for helping me.  I did not want to be an ugly toad any more, I will fix my space plane and return to the moon!“.

Only this time, they went back together to the moon where they had many sack races, never separated and were very happy together.

Moral of the story: If somebody is ugly it does not matter. Do not judge people by their aspect, because they could be more beautiful than what they look like.