BERTIE AND THE LABYRINTH

There was once a very wise man called Robert, though everyone called him Bertie for everyone loved him a great deal. Bertie had lived all his life in a small village, but two years ago when he was seventy years old he had gone to live in the big city with his daughter Ana. Bertie had always loved history and on his bedside table there were always exciting adventure books about historical figures.

One day as he was browsing his daughter’s bookshelves, he came across a well worn book that looked very old. Bertie realised that this was no ordinary book; it was a special book, and that inside its pages there could be a great secret.

On the front page were Egyptian hieroglyphics that Bertie had seen somewhere before, though he couldn’t quite remember where. So he set his spectacles on the tip of his nose and began reading the first few pages. It soon became clear that this was indeed a very old book – it had been written by an Egyptian historian who had described in precise detail the steps the reader had to follow to cross through the labyrinth and reach the treasure that was hidden there. 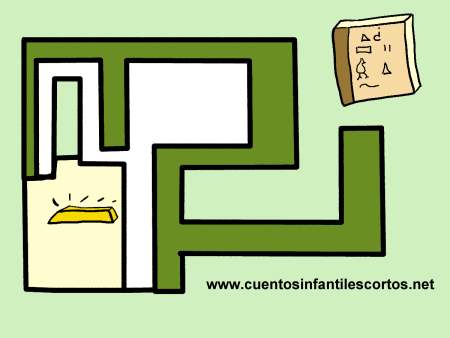 Bertie spent the whole night reading that mysterious book and deciphering the riddles that he came across. He finished it just before dawn, but he still hadn’t managed to find the answer that would lead him to the Egyptian treasure. But then, on the very last page, he found an unfinished phrase that was the key he needed to solve the riddle.

After a few minutes in which Bertie thought hard about everything he had read, he found the answer to the unfinished phrase! Not wasting a single second more, he took a pen from his pocket and finished the phrase in the book.

Suddenly, the book began to shake and from its interior sprang some powerful rays of light that illuminated the room and transported Bertie to the labyrinth described in the book. It left him outside a door without a lock, but with a hole in the shape of a book.

Bertie was disoriented, for it was like he was in a dream and living the story narrated by the Egyptian historian. But it was all real. So he took the book and pushed it inside the hole in the door, and after a few seconds the door opened up revealing a room full of talismans, jewellery and treasure, which the Egyptian historian had hidden there safe from wicked hands.

The message the historian had left in the book was very clear: he only wanted the treasures of the past to fall into the hands of a sensible and good-hearted person able to appreciate the treasure – not for how much money it could make, but for its historical value.

So Bertie returned to the city with the Egyptian treasure and took it to a history museum that could teach other people about the great historical worth contained in each of these pieces, thus respecting the wishes of the old Egyptian historian.

Next ArticleTHE BOY AND THE POLITICIANS