SHORT STORY OF THE FLOWER

Once upon a time, there was a beautiful flower with very attractive colors: brilliant red; orange and yellow.  The flower was very happy, because everybody said she was beautiful. One day began to rain during sunrise and did not stop until nightfall.

When the flower woke up the next day opened her petals and realized that they had lost their color. Now were white like the snow. What had happened? The flower was so sad, could not stop crying. Suddenly, a fairy wearing a dress with a long tail and colored like the rainbow, appeared: 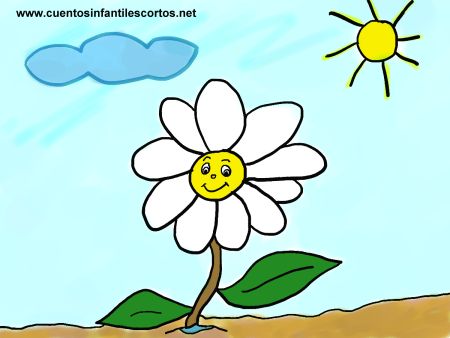 – “What´s wrong, beautiful flower? why are you crying?”

-“Because I have lost my lovely colors, the rain, last night, has erased them completely”

– “Don´t worry! I will give you them back thanks to these magic markers; but under one condition…”

“I want you to delight everybody with your colors, but also with a nice perfume”..

The flower accepted, and the  fairy spilled on her a liquid from a little perfume bottle, and the other flowers and field inhabitants could enjoy the smell of that slight perfume.

Then, the fairy took the magic markers and painted the flower’s petals with patience, until she was as beautiful as before.

The flower thanked the fairy and promised he that would keep flooding the field with her perfume, sharing it with everybody.

Next ArticleTHE FRIEND OF THE VEGETABLES