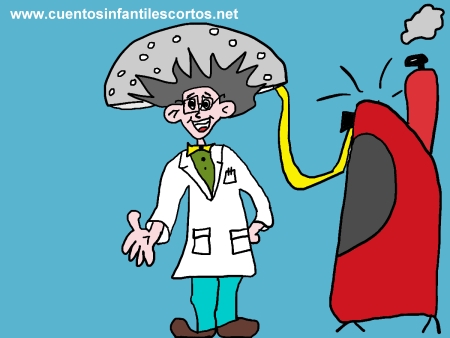 Albert ignored these comments and while they were all wondering if he really had gone mad, he kept working on the final details of his time machine. For more than five years, the old scientist had devoted all his time to designing and experimenting with equipment that could make his dream to travel back in time a reality, for he wanted to return to a very special moment in his life, the day his father had let him come into his laboratory to do an experiment together. That day was very special for Albert, for it was at that moment that he knew he wanted to be a great scientist when he grew up. Unfortunately, he still hadn’t achieved it.

One day, Albert was working in his basement laboratory as he did every day, when he had a brilliant idea. “Now the machine will work, I’m sure of it!” exclaimed the old scientist very excited.

After rummaging around in the kitchen drawers, he found what he was looking for: a metal colander that he would use as a helmet… After two hours inside the machine, he shouted: “Finished!!! It’s time to test the time machine!”

Albert put his time machine in a cart to take to the village square, where all the neighbours had gathered. Once everything was ready, he said: “Dear friends, I’ve asked you all here so that you will be the first to see the time machine I’ve designed. It’s my dream, but if it goes wrong I won’t lose hope and I’ll keep working on it. Thank you all for coming!”

So Albert got into the machine, put on the colander he had borrowed from his wife, and typed the date 1719, 40 years previously. Suddenly, the machine began to wobble and emit strange sparking noises, and in a matter of minutes, the time machine had vanished, with Albert the scientist inside it.

Everyone at the square was open-mouthed, amazed at what had just happened. Yet they had no time to say a word before Albert reappeared in the very same place where the time machine had been.

“I’ve done it, hooray! I travelled back in time!” shouted the old scientist ecstatically.

Then one of the neighbours who had underestimated Albert got onto a chair and said: “I would like to apologise in public to our neighbour Albert. I doubted his word and, what’s more, I even thought he was going mad. I’m very sorry, Albert, I shouldn’t have underestimated you. Congratulations on your time machine!”

And so our story ends happily for our scientist, for he had succeeded in making one of his dreams come true.

Next ArticleTHE WISE AND PATIENT CAVEMAN