JAMIE THE ELEPHANT AND THE TEACHER SQUIRREL

There was once an elephant called Jamie who was bigger than any elephant that had ever existed before. He went to see a squirrel called Sally to ask her a favour.

Sally had been a maths teacher for many years. So Jamie went to see her at school, for he thought that she would be there, like every day.

But Jamie the elephant was surprised to find that Sally wasn’t at school that day, for she had gone to teach a little girl whose leg was in plaster and had to stay at home. This annoyed Jamie the elephant quite considerably, because he couldn’t ask the teacher for help right then and there. Instead, he would have to work really hard by himself to solve a maths problem they had given him at the university. 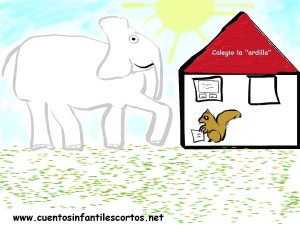 The next week, Sally went to visit Jamie, to see what he had wanted the day she wasn’t at school.

“Hello Jamie, how are you? I hear you came to see me at school the other day. Was there something you wanted?”

“I’m so sorry, Jamie, I would have loved to help you. Will you forgive me?”

“But you know I would have helped you if I’d been at school, don’t you?”“I suppose so,” said Jamie slowly.

“So will you forgive me?! And stop being angry?” asked Sally.

“Yes, of course I will, Sally! I’m sorry I got angry for no reason”.

And so the Jamie the elephant and Sally the squirrel were happy again, and Jamie learned that he shouldn’t be selfish – he had understood that he couldn’t have everything he wanted exactly when he wanted it.

Next ArticleTHE CLOUD AND THE WIND