Ghosty was the king of the ghosts and everybody in his kingdom admired him. He was the best, the most handsome and the wisest ghost they had.

They all wanted to support him. Every morning lots of volunteers were at the door of his castle waiting to help him and so he was never alone as he always had someone to do things for him. 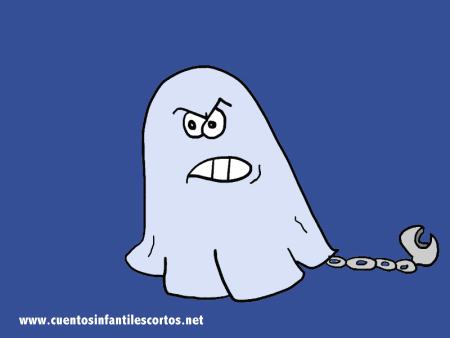 One day the ghosts asked Ghosty to teach them everything he knew. First they asked him to show them his scare methods, but Ghosty didn´t actually know how, because he had never done anything for himself. He just said he was tired, made an excuse and went to bed.

The next day they asked him to show them how to be elegant like him, but he did not know about that either and said: “I´m the only one that can be so elegant, so forget it” and the rest said: “Oh! He is so smart!”

Then they asked him how could they be as smart as him and he didn’t know what to say. This made Ghosty think about things and realised that if they kept asking him stuff, they would end up discovering how useless he was when nobody helped him.

So, he decided to stop lying and tell the truth: “You all think I´m the wisest of ghosts just because I´m your king, but I can´t do anything on my own because you are always helping me! So, from now on I will do everything without any help and become the king you all deserve!”

Next ArticleMOBILY AND THE SMARTPHONE