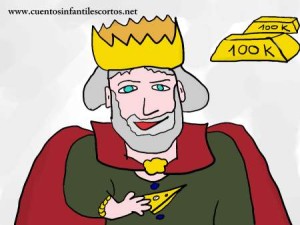 One day he found a magic lamp and a magician appeared. – “I want to have more treasure than I already have.”- Said King Midas. The magician thought that it was an opportunity to teach him a lesson and said, – “Your majesty, I can give you a power that will make you the richest man in the world, anything that you touch will turn into gold”.

The king was delighted with his gold fortune, everything he touched turned into gold, and he turned cutlery, tables, chairs and flowers into gold. But when he sat down for dinner, he also turned his food into gold.

Then King Midas went to visit his daughter and the moment he hugged her, she turned into a gold statue. Desperate he went to ask the magician what was going on.  – “I wanted you to realise that being rich is not important, you have to pay attention to the important things, like your family”, said the magician.

And King Midas learnt his lesson, and the magician changed everything back to normal. King Midas was never greedy again and lived happily with his family to the end of his days.