FERMIN AND THE PAMPLONA BULLS

There was once a man called Fermín who loved running with the bulls in the Spanish town of Pamplona.  Fermín was from a small village in Spain, and every year in early July he would pack his bags and set off for Pamplona to join lots of other people at the festival. It was a very popular event called the “Sanfermines” – a bit like his name. But the first year he went, he didn’t realise just how big the bulls were and just how fast they ran.

Fermín dressed all in white with a red neckerchief around his neck and prepared himself to run with the bulls. There were hundreds of people there, singing a traditional song to Saint Fermín to protect them in the chase… and after a few minutes, they released the bulls from the pens.

Fermín was very afraid when he saw the bulls running towards him, for he had never seen such big bulls before. He froze in sheer fright from the chaos of all the people running and all the bulls hurtling along behind them. 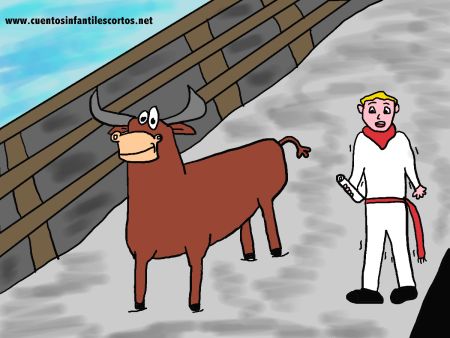 Unfortunately, Fermín had frozen in the middle of the most dangerous street in the chase, Estafeta Street. Just when the bulls were about to reach him,a man came racing up to him, grabbed his arm and pulled him over the barrier.

“Thank you so much, my friend, you’ve saved me from the bulls! I don’t know what happened, I just couldn’t move. It’s my first time here and I was very frightened,” Fermín told the man.

“No problem,” said the man, “but you should know that it’s very dangerous to run with the bulls. At the very least, you should be sensible and not put your life in danger, nor that of any other runner.”

And so the first Sanfermines our hero went to helped him to learn to be careful and think carefully about risks. From then on he only watched the running of the bulls from behind the barrier, cheering on other people who were in fact much better prepared.

Next ArticlePAPPY THE PAPER BAG