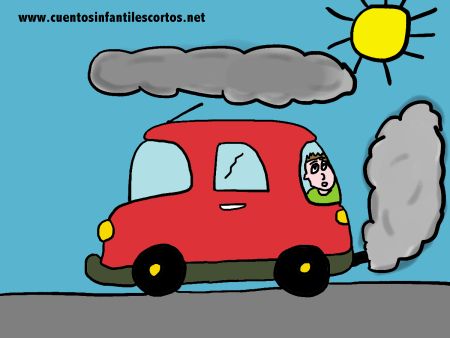 “So I can get to work on time, son. The bus or metro would make us late,” answered his father.

From that morning, Lewis couldn’t stop thinking about why people used the car so much. Not quite satisfied with his father’s answer, one day at break he went to talk to his geography teacher.

“Sir, can I ask you a question?” asked Lewis and the teacher nodded.

“Why do people use cars so much if it causes all that grey smoke?” Lewis asked.

“By grey smoke, I suppose you mean pollution, Lewis?” said the teacher.

“Well you’re right, Lewis. People should use public transport more often to get to school, work or other places. That way we’d help the grey smoke disappear from cities and help look after the environment. What do you think, Lewis?” asked the teacher.

So that afternoon when Lewis’ father came to pick him up from school, he told him: “Dad, we should come to school by bus tomorrow. If there isn’t enough time, we’ll just get up early and that way we’ll help look after the environment.”

And that was how Lewis taught his father that it was very important to reduce the amount of grey smoke in the world. Not to mention that every single person could help just by swapping the car for the bus. And from that day on, Lewis and his father always travelled to school and work by bus.

Next ArticleTHE PRINCE AND THE MONSTRO