JAMES AND THE TEACHER´S WHISTLE

James was a peculiar boy who lived near a main square in London, he was 7 years old and what he most hated in the world was his sports class at school.

James didn´t like to practice sports at all  and when he had sports class he would tell his mother he was sick, but his mother knew him very well. 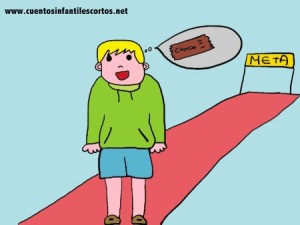 His mother was worried, James was getting fatter and needed to play some sport. So she went to talk to the gym teacher.

The following week, James went to sports class feeling depressed but something was about to change.

After the conversation that James´ mother had with his teacher, the teacher realised that the boy needed motivating, and so he made a plan.

James´ teacher knew that he loved chocolates at lunchtime at school, so before starting class she said: “James, today we are going to play a special game. When I blow the whistle you have to run to the corner in less than a minute and a half. If not, today you won´t have any chocolate at lunchtime”.

James was shocked. He didn’t know what to do. He hated running but loved chocolate!

The teacher blew her whistle and shouted – “Run James!”

His legs were trembling and he couldn’t move, but then he imagined all those chocolates and suddenly started running very fast. Everybody was surprised at how fast he was.

James realised how good he felt doing a little sport, so from that day he always went to sports class and became a very healthy child.