Once upon a time, there was a little soldier named Lead. He was a member of the Royal Guard in a faraway kingdom.

Lead was 60 years old, and was the head of the three soldiers that made up the Royal Guard. Their work was to protect the King. 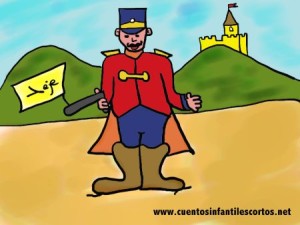 One day the little soldier went to talk to the others, “I have a mission for you and that is to slove this enigma. I am about to retire, so, whoever solves it will be the new chief“.

“If I have 17 hats and I have to share them out between the three of you, how can I make you all happy?

The soldiers started to answer in order. Neither of the two first were right, but the third one said: “If I borrow a hat from a shopkeeper, we would have 18 hats which, divided into three parts would be 6 hats for each of us, and then if we give the shopkeeper 3 hats we will have 5 each.”

They were all surprised, Lead said “Your answer is the smartest one, and you have solved the enigma.”

While the other two congratulated him, Lead interrupted them. “By the way, none of you will be my successor“. The soldiers looked at him very surprised. “”But I solved the enigma!”- said the smart soldier.

And Lead answered: “Did any of you think about why a soldier would want five hats? A soldier has to have one hat and take care of it. When you learn to take care of your things like we care for our King, you will succeed me.“.

That is how Lead, the little soldier, taught the soldiers a valuable lesson.

Next ArticleLINA AND THE CHICKPEAS