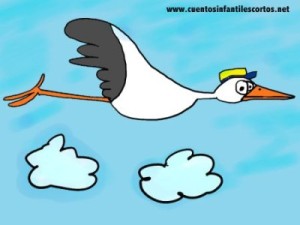 Lily had lots of friends and often played with them, but what she most liked to do was to take care of her town. Every half an hour, Lily would fly around and watch everything that was going on.

She was the smallest and bravest stork in the village and everybody was happy to have storks around except for a stockbreeder. The stockbreeder always complained about the storks, because they scared his cattle and every day some of his animals ran off.

Lily went to talk to the stockbreeder’s cows and sheep: “Why are you scared of storks?” – she asked them – “Because it looks like they will hurt us, as they are so big, not like you, you are so small so we we aren’t scared of you”.

Lily answered: “The big storks are my family. They are good and kind like me. Don´t worry they won´t hurt you”.

All the animals understood that before being afraid of something just because it is big, it is better to know whether it is dangerous or not. The stockbreeder never lost an animal again and all the town residents lived happily with the storks flying around them.