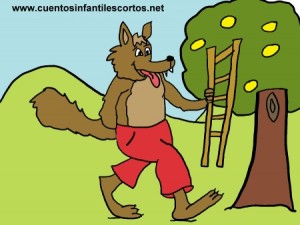 One day, Peter started to shout –“Help, help! the wolf is coming!”- The alarmed neighbours ran out to help him but they just found Peter laughing at them -“Ha, ha, ha, You are so silly, I was joking!”. The neighbours were really angry and went back home.

The next day, Peter did the same – “Help, help! the wolf is coming!”- Some of the neighbours didn´t pay any attention, but others ran out again to help Peter. But again, it was just a bad joke. Peter couldn’t stop laughing and the good neighbours then decided to ignore him.

The day after, Peter the Shepherd was with his flock when a big wolf appeared and started to kill the sheep. Peter couldn’t believe it, and he shouted again – “Help, help! a wolf is eating my sheep!”

But no one in town ran out to help him. The wolf ate all the sheep and Peter felt really destitute.

From that day on, he never lied again and he had to look for a job as he didn´t have any sheep left to care for.