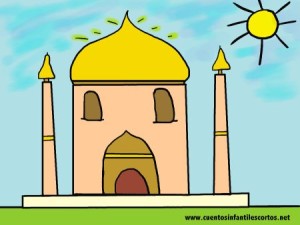 Neither of them knew the other, but one day, when they were six years old, they met in the street and couldn’t believe what they saw, it was like having a mirror in front of each other.

On that day, the twins passed the time talking about their lives to find out why they were separated. After a few hours they had an idea, and that was to swap their clothes and live the other’s life, and so that is what they did.

Days in the kingdom passed, and everybody noticed that the Prince had changed. He had forgotten all his old habits and that made people think that The Prince was going crazy.

So the people in the palace decided to take him to a mental hospital. At that moment his brother appeared. “Don´t! He is not insane!”- he shouted.

Everybody in the palace was surprised to see a beggar who really looked like the prince.

The prince told them the whole story about his brother. So Tom was named the prince´s councillor and they lived happily ever after.

Next ArticleTHE CHICKPEA BOY AND THE LENTIL GIRL