Every morning, after eating, she used to go to the beach. There, she walked slowly on the sand, feeling every grain between her toes, taking the same way as always, until she arrived at a stone where she used to spend many hours. 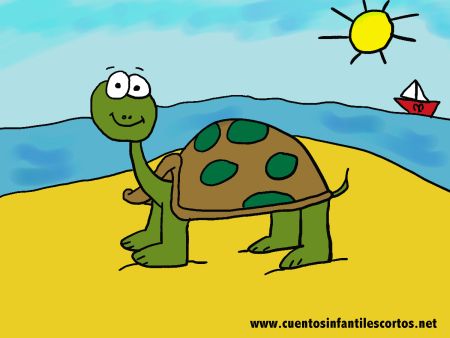 She could feel the immensity of the world from there. The bay was eternally swirling without rest, and together with the sea, the wind whispered its music from the bottom of the earth to the top of the mountains, and they left some of the musical notes for herself.

But, what she most liked, was to see the birds hovering in the air, being a part of the landscape but so far from her at the same time. Only with their wings spread out, nothing else!

– “They may know something I don´t know” – wondered the turtle.

One morning, a little bird perched on her shell, and asked her incessantly:

– “Why do you come here every day, stopping on the same stone? Is it because you are green? Where do you come from? How old are you? Why are you so old?…”

The turtle couldn´t see him, but could hear and feel the bird’s weight of her legs.

– “I just come to see you fly, I can’t believe you can do it” ´replied the turtle.

The little bird dropped down from the shell and walked curiously around the turtle:

– “You can´t be that big and not be able to fly! Have you ever flown? I have flown ever since I can remember”.

The little bird flew around and around her, until it looked like they were both flying, watching from afar, as the turtle stretched out her neck trying to follow him dancing.

– “Follow me! I will wait for you at the top of that mountain!”

And the bird flew away. The turtle did not hesitate to go to that distant place.

Next ArticleSHELL WITH WINGS (SECOND PART)