One cold winter day, Pushok went missing. Concerned, Miriam looked all over for him. “Pushok, Pushok”, she called. At last she heard a faint meowing coming from the tree next to her. She looked up and at the same time Pushok jumped into the safety of her hands. He had wounds all over his body. It turns out that as he was hunting he was ambushed by a dog that bit him. Pushok barely managed to save himself in the tree.

But staying home was not an option. Pushok had to hunt to bring in food. This time Miriam would always be by his side. She carried a heavy stick at all times and would not hesitate to use it. 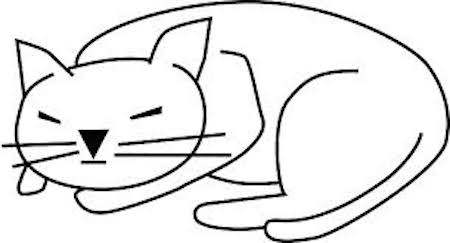 Gradually life in the city was improving. The Russian Army had established a supply route to Leningrad that led through the frozen Ladoga Lake. The Germans bombed it relentlessly but they could not break the Road of Life which was the name Leningraders gave it.

As precarious as Miriam and Pushok’s situation was, they still found time to have fun. Their favorite pastime was playing checkers. Can you imagine playing checkers with a cat? No? There are a few things you need to know first. Cats are intrepid thinkers therefore you should keep up the pace. Make a move as soon as they make theirs, don’t hesitate. Cats might make two moves in a row. That’s ok because so can you. Moves in any direction are accepted. When you can’t change your opponent you change the game!

With the arrival of spring, Efim was able to come home to visit. Each time he brought food, enough food for Miriam and Pushok to stop hunting”.

“What was Efim’s job in the navy” asked Effie.
“He was a mine spotter”, said grandmother. “He would stay on the deck of a fast patrol boat called a cutter and scout for mines that the Germans were laying. Ships in the harbour were counting on Efim to find mines. A single mine could easily sink an entire ship!

One day the skipper told Efim that he could go home to see his mum and that this time he could stay overnight. As happy as Efim was to spend the evening with Miriam and Pushok, he was even happier the next day for it was special. On that very day the Russian victory over Nazi Germany was announced on the radio.

Instantly all Leningrad erupted in celebration. Every street, square and promenade was filled with survivors of the blockade. It took Efim a long time to get to the harbour. It seemed that everyone in the street was trying to hug him!

When Efim made it to the dock, the cutter had already sailed. Sadly it never returned. Sailors from another ship told the crying Efim how they saw his cutter being destroyed by a mine. Those who laid the mine may have surrendered but, as far as the mine was concerned, it did not change a thing.

Overcome by the sad news Efim signed up for a long expedition to Antarctica. All this time when he was away, Pushok kept Miriam company.Pushok lived long enough to see Efim get married and for Efim’s first daughter – your mother – to be born. As a toddler your mother often expressed her affection for Pushok by pulling hard on his tail. Not once did Pushok lash out, scratch or bite her.

Overall Efim’s time in the navy as a mine spotter, a sailor and a dock worker, amounted to more than sixty years. This was quite a milestone. One day the navy sent a reporter to interview him. The reporter published everything Efim told him about himself, about Miriam, and about Pushok.

Touched by Pushok’s bravery people started sharing stories about wartime pets. Stories that their parents or grandparents shared with them. It turns out that Pushok’s conduct, as exceptional as it was, wasn’t unique. During hard times some pets were acting in ways you would not expect from an animal.”

Grandmother then left, but Effie was still thinking about Pushok. She looked at Leo who looked straight at her. He appeared more mature to her now. Effie opened the checkers box and put pieces on the board. Intrigued, Leo sniffed them. “Let’s play Leo”, Effie said, and she made the first move.

Share this short story for kids with your friends on Facebook, Google +, or Twitter with the buttons you’ll find at the end of the story. Thank you! Story for kids written by: Stas Holodnak.

Next ArticleSARAH, THE RUSSIAN GYPSY