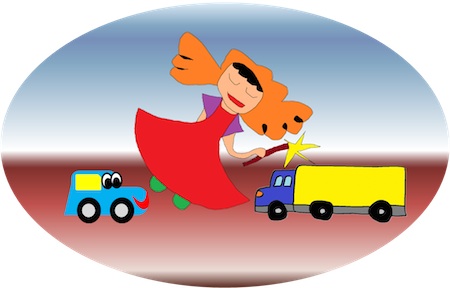 John said the magic words and suddenly, the toy fairy appeared in a beautiful racing car.

-“I have bought new toys to keep my friend the car company, but they don´t talk. Can you make them talk?” – asked John.

-“No problem, but you have to do something first. I see you have many toys, and there are other children who don´t have any. You have to give one of your toys to a boy or a girl who doesn´t have anything to play with“.

John decided to give the boat to his friend and neighbor Tina who he used to play with sometimes in the park.

Tina did not have toys because her father and her mother didn’t have a job and the only money they had was for buying food and clothes. When John gave the toy boat to Tina she was very happy because there was a pond in the park and they could play there with her toy boat.

After giving Tina the present, John went back home where the fairy was waiting for him. Sitting on her racing car, she touched the toys one by one with her magic wand and they began to talk.

This is how each of them introduced themselves. The car was happy, John was happy too, now, they had many friends to play and talk with.

From that moment, John and Tina became very good friends. He spent many hours playing with her in the park with the talking toys.

John won a very special friend and learnt that he was immensely happy to share what he had with others.

Moral of the story: If you have a lot you may feel good or you may not. But if you share what you have, you will be doubly happy for sure. And you will also make another person as happy as you. And this is even more gratifying.