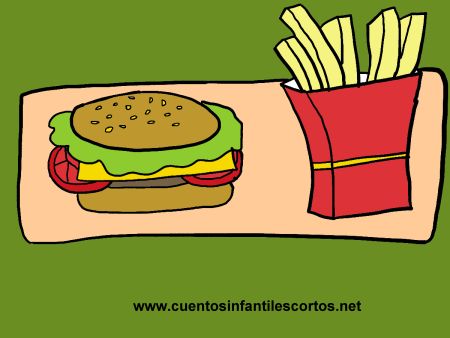 The next day, like every Sunday, Joe and Daniel met up by the park to go for a burger, but today something unexpected was about to happen.

Just as they were about to go into the restaurant, Joe stopped at the door and said: “Dan, I don’t want a burger today. If we keep on eating so many of them, I’ll get fat or sick. So shall we swap the burger for a salad today?”

“‘Course we are! All I’m trying to say is that we should eat salads more often, and that way our diet will be healthier, don’t you think?”

“Yeah, you’re right. Let’s get a nice salad then,” replied Daniel with a smile.

And that was how the boys realised that eating fast food isn’t all bad – but you should only eat it from time to time and instead eat a lot more vegetables for a healthy diet.

Next ArticleCOLIN, THE SPANISH CUCUMBER