Once upon a time there lived a cat called Theodor. All the other cats in the area had great respect for him, for he had managed to be adopted by an old lady and he was looked after better than he could ever have imagined.

Old Chester was the local police-cat and his main duty was to warn the other cats of dogs prowling around nearby.

Today was an important day, for all the cats were going to decide who would be the new police-cat, for old Chester couldn’t run as fast as he used to and he was getting old and tired… 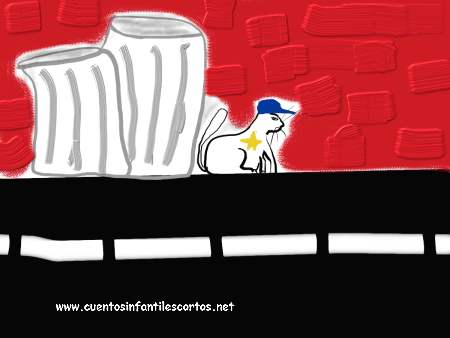 Theodor gave a long speech to persuade everyone that he was the best cat for such a big responsibility. He ate very well, he said, and this made him strong and healthy and therefore very fast.

Theodor thought he was certain to be voted the new police-cat because nobody else volunteered. But suddenly a pretty little cat appeared on top of a rubbish bin and spoke. “Hello friends, I too would like to be a candidate, for I’m very agile and quick“.

Surprised, Theodor replied: “But you’re only a little she-cat and this job is for he-cats, because to be a police-cat you have to be very brave, strong and fast!”

The other cats began to purr and miaow in confusion. Having listened quietly to the two cats, old Chester now spoke: “Dear friends, maybe it’s not important whether our new police-cat is male or female. What’s really important is that he or she can perform the duties of a watch-cat and keep all cats safe“.

All the cats thought hard about what Chester had said, and argued for a while about who should be the new police-cat… And who do you think it was in the end?

Once upon a time there was a huge bear living on the outskirts of New York. He was a harmless bear, that had grown up there so everybody knew him and he could hang around the place with no problem. His name was Kuba and he had lots of friends all over the city.

Next ArticleTHE LITTLE BOY AND THE FOREST