PIPPI AND THE ROLLERCOASTER

There was once a twelve-year-old girl named Pippi, who really liked amusement parks even though she had never been to one.  Her parents had never let her go because they said they were very dangerous, but they would make an exception on her birthday and take her to the biggest amusement park of them all.

So on Pippi’s birthday, her parents bought her an all-day ticket for the park. Pippi was very happy about that, as you can imagine.

When she got there, Pippi’s jaw dropped in amazement at the amount of rides, and just how big the park actually was. Pippi and her sister ran to a new ride that had just been opened - the biggest rollercoaster in the world. 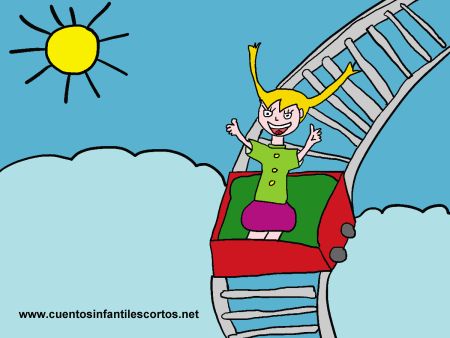 Just as they were about to get on, Pippi felt a fluttering in her tummy that made her stop in her tracks…

“But… I’m scared! This rollercoaster is so big and it’s sure to go very, VERY fast!” said Pippi in a trembling voice.

But then she remembered something her grandmother had said not so long ago: “Remember, Pippi, being afraid is the worst thing that can happen to you. Put it aside and bring out the courage you have inside you!”

Recalling these words, Pippi stepped forward and got on the rollercoaster. And that was how she learned that her grandmother was right and that you must overcome fear in order to move forwards.

Next ArticleTHE SQUIRREL AND THE FOREST FIRE