THE WISE AND PATIENT CAVEMAN

There was once a very, very big mountain where there were lots of trees and bushes. It was also the home of a group of humans that lived in caves dug out of the mountain rock. In fact, there were two families there. One lived in a grey-coloured cave, the other in a greenish cave (which was due to the type of rock). Naturally, they were known as the Greys and the Greens.

The two families sometimes ate together, when they would talk about the mountain trees and how to fell them to obtain the wood with which to make fire and heat. One time, Peter felt he was ready to join the conversation. The wise grandfather listened intently to the young man, because Peter believed that the trees were there to be felled, and that it didn’t matter if they were replanted or not because they took so long to grow back. 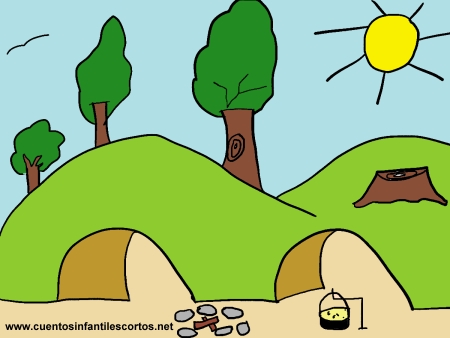 Once Peter had given his opinion, the wise grandfather told him this: “Nature is patient, and we humans must be patient too,” and he proposed a challenge: “I’m going to shave all my hair off, and we shall see what nature does to maintain the balance on my head. Come and see me in a month.”

Young Peter couldn’t understand what on earth the grandfather meant by this, and went home none the wiser.

The wise grandfather from the Greens waited exactly one month inside the cave for Peter to come. He knew that all he needed was patience for his hair to grow back, and to teach the boy a lesson.

At the end of the month, Peter entered the Green cave and was surprised to see the grandfather with a full head of hair again. But he understood the grandfather’s message, and said: “Thank you, Grandfather Green, I’ve learned a lot from you. You have taught me two things: the first is that we must look after our natural resources in order to continue using them, for example by replanting the trees we have cut down. The second is that I must be more patient with nature and try to learn from it.”

Next ArticleTHE TRAFFIC LIGHT AND THE ZEBRA CROSSING