On a faraway beach there lived a giant turtle named Mary: Mary the great turtle.  She was one of those turtles that can live for up to 200 years.

Mary was only 7 years old, but she was the size of an adult turtle.  She was a very healthy eater. She ate all the good seaweed from the ocean, which made her grow strong, healthy and big. Mary loved to eat. She would never skip a meal. 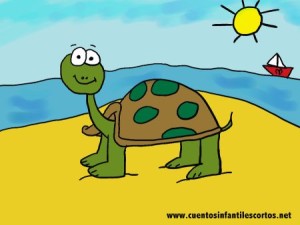 One day, Mary’s friend Crocky the crab (have you read the story of Crocky the Tanned Crab?), saw her eating and decided to go and eat with her. Crocky went to Mary and started to eat some of the seaweed the waves brought up to the shore.

Mary wasn’t happy about this: “Don’t eat with me, you are bothering me,” she said in anger. This made Crocky the tanned crab feel sad, and he left the site crying.

Mary’s mom, who had seen everything, went up to Mary and said “Mary, you were very mean to Crocky, he just wanted to be with you.  If you are not nice to people around you, you will end up with no friends.”

Mary was left alone to finish her meal and she realised that even though she didn’t like people to eat with her, she shouldn’t be so selfish, or she would end up alone forever.

So from that day on, Mary met her friend Crocky for lunch every day. She was also very nice to everyone she bumped into on her way there.

And that is how, Mary the giant turtle, became known as the kindest turtle on the beach.

Next ArticlePETER AND THE MYSTERIOUS BRIEFCASE