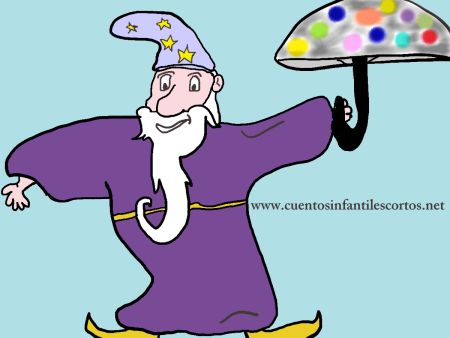 In a flash, Arion realised that the umbrella was magic, and that by holding it he could fly. Excited, he shouted: “I’m flying like a bird at last!!“

The wizard spent the whole afternoon flying about from one place to another and having a grand old time. But as he glided near his house, he noticed Dabra curled up on the ground outside, weeping because his master had been angry with him. So Arion the wizard flew to earth, shut his umbrella and went up to his cat.

“Dabra! I’m very sorry, dear friend, for being so horrible to you. I know that all you wanted was to say hello and that you didn’t realise that the potions were there. Come home with me and I promise it will never happen again. I’m very sorry for having treated you that way,” apologised Arion the wizard in remorse.

For after all, the wizard had achieved his wish to fly like a bird thanks to his cat Dabra, who had accidentally mixed up all the potions to create a flying umbrella.  And Arion the wizard understood that he should never treat his dear cat Dabra so horribly ever again.